The children’s ward – 5 tips on surviving your stay 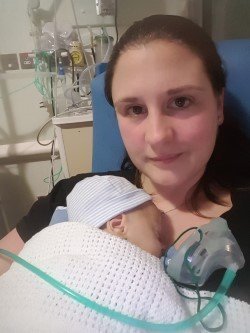 Life after the NICU for me was regular trips to the children’s ward. Our first trip there was 3 days after being discharged. The Neonatal home visit team had come out to visit. They did all the normal checks and I raised with them that I had noticed my son’s should felt like it was clicking. After a thorough examination they felt the click and asked me to take my little boy into the children’s ward to be checked over by a doctor.

The nurse rang ahead to inform them I was coming and I drove down to the hospital. I was seen quickly and quickly put into a bay. This was a shock to the system, even though I had been shown the ward before being discharged from the neonatal unit actually being on it was so different. It was nosier, there were less staff around to support you and there was less privacy.

I was still expressing milk but they couldn’t find a pump and I had left in a rush so didn’t have my own to hand. In honesty I probably thought I would only be a few hours as well – not the 6 or 7 hours that it turned out to be.

It was so different to being on the neonatal unit

On the neonatal unit if an x-ray was needed a mobile machine was brought to the baby. This isn’t the case on the children’s ward so I needed to take my son to a different part of the hospital. I took him down and spent half an hour waiting for our turn. I was nervous as my son would soon be needing a bottle and every bottle needed medication adding. I’d kept the strict timetable that the neonatal unit had. I was able to get back to the ward and was only 10 minutes late.

The next day everything seemed to be fine. My little boy was a little fussier than normal and I wasn’t able to put him down. His Dad gave me a break at lunch time and took over doing his bottle so I could have a cup of tea and something to eat. Suddenly our son stopped breathing. My husband began CPR and I rang 999. The ambulance turned onto our road just as my husband managed to bring our son back to life. We were rushed back to hospital where I me and my son would live for the next week. Our little boy had bronchiolitis.

This certainly wouldn’t be our last visit but it was our most dramatic return to the ward. During each visit I learnt new tricks that helped make each stay a little easier. For any new preemie parents out there here’s what I learnt.

Make sure if you are taking your child to the hospital yourself that you know a few different routes in case of bad traffic. If you are calling for a taxi have a few different taxi numbers noted and set aside specific money to cover the fee. Have a call tree, this is where you phone one or two key people that need to know and they inform others if they need to know.

Have a hospital packed and ready to go at home. I have 2 packed one for me and one for my son. In mine I have some holiday mini toiletries, cash, towel, pyjamas, clean clothes (my son always ends up being sick all over me), water bottle, box of breakfast bars, pen, notebook and a spare charger. The water bottle has been a game changer, the ward is so hot but water is easy to get hold of!

In my son’s there is a towel, blanket, bath products, clothes, pyjamas, toys. I pack medication just before leaving home and now that he’s older drinks and snacks too.

Have a cool bag brought in

My husband usually comes in later with a cool bag. Him and my parents keep it stocked with fruit, sandwiches, picky bits, a bottle of cordial and a few sweets. You need to look after you too and unless you are a breastfeeding mum you are not fed.

This may seem an absurd time however between 5am and 6am the nurses tend to be less busy and therefore can keep an eye on your little one. This gives you 10 to 15 minutes to have a quick wash, clean your teeth and maybe brush your hair! It’s enough time to refresh yourself enough to see you through the morning.

If help is offered – take it!

This one is a point that definitely needs to be stressed to all the mums’. If someone is offering help don’t try and do it all yourself. The first few visits I stayed by my son’s side and didn’t move. I soon realised just how much of a toll it took. To everyone’s surprise I started taking up my husband’s offers to do the nightshift and I went home to have a proper shower, wash my hair and sleep in a comfortable bed. Those 8 hours had me refreshed and ready for another few days on the ward.

The well-known phrase when you go on a plane is to ‘fit your own oxygen mask before helping others’. You do this because if you do someone else’s first you might not do it quickly enough and then you’re both in trouble. However by fitting your own first you’re then in a position to be able to help someone else. In short, you need to look after yourself as well as your little one. If you burnout then you are no use to yourself or your little one.

I hope these suggestions for surviving the children’s ward help, feel free to add any more in the comments!

Also did you see that our NICU diaries are now available on Amazon! There are 5 diaries to choose from: